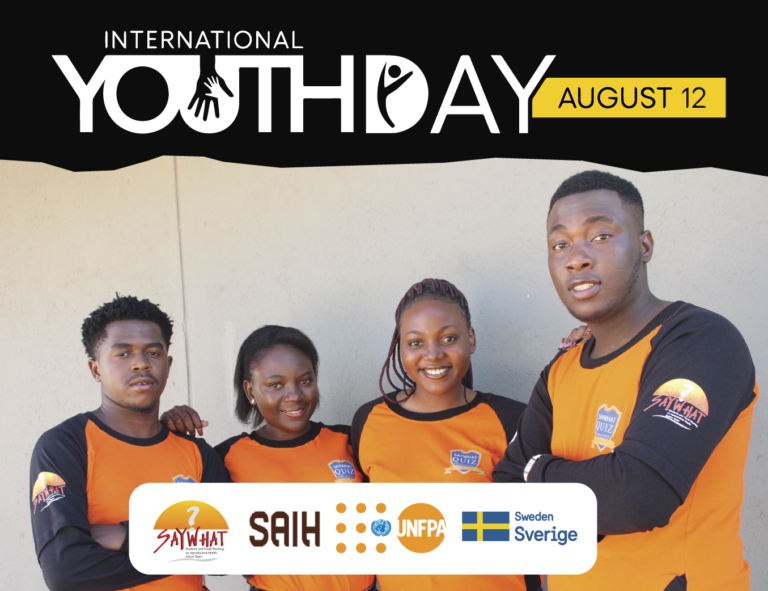 Students And Youth Working on reproductive Health Action Team (SAYWHAT) joins the rest of the world in commemorating the International Youth Day. Since the turn of the new millennium, every year the world celebrates the youths on the 12th of August.

This year the commemoration is running under the theme, “Intergenerational solidarity: Creating a World for All Ages.” This is a call for a collective voice across all generations to come together and see to it that the United Nations (UN) promulgated Sustainable Development Goals (SDGs) are met by 2030.  Satisfying all the SDGs in the 21st century will ensure co-existence between all age groups of humankind and all its surrounding ecosystems. There is need of a collective solidarity to confront the climate change fires, emerging health problems, food shortages, and water supply among other key lifesaving determinants.

Solidarity refers to unity and agreement of individuals, groups, communities, and societies who share common interests and visions. Zimbabwean youths across socio-economic and political divide need to come together and persuade the government and development partners to provide their health needs. Parents and guardians should also join the call and implore the government to take into account the youths’ social and economic needs as denominators of their health needs.

In the past two years, cases of teenage pregnancy and child marriages have been reported at an alarming rate. The twin scourges also have a direct impact on the spread of HIV and Sexually Transmitted Infections (STIs) as well as child bearing complications which at times have led to the loss of young lives. This ultimately impacts on the girl child as she cannot fully realise her potential under such circumstances. In some cases, older people have been found to be the culprits of child pregnancies which brings into question the intergenerational solidarity.

Sexual Gender Based Violence (SGBV) has been growing exponentially. In Zimbabwe, a week hardly goes by without cases of sexual related violence involving the youths. Some youths have lost lives through either suicide or after being murdered by their partners. Reading these cases in the press should alarm every concerned person to rise and take part in raising awareness against sexual gender-based violence.

While the 2022 census, figures show that over 70 percent of the total population is formed by the youths, defeating deeply rooted and complex economic challenges faced in the country requires intergenerational effort to come up with techno-entrepreneurial innovations and skills. This is fundamental for all and sundry to meaningfully contribute to economic and social development of the country.  The government should on a massive scale, introduce techno-entrepreneurial spaces to absorb thousands of graduates churned out of various colleges dotted across the country. The technological innovation hubs recently planted at higher learning institutions across Zimbabwe, should answer to the education 5.0 questions.

Alongside the introduction of the innovation hubs at tertiary institutions, community based and less technical scientific hubs should also be introduced to attract non-college going youths so that no one is left behind in contributing to the economic development. This will also go a long way in bailing out the youths from drug and substance abuse carnival, commercial sex work, among other health damaging behaviours.

Today’s international forums on economy, politics, climate change and health should see the youths having seats for them to be conscious of the challenges bedevilling the globe also proffer solutions. Climate change has emerged as one of the challenges that require solidarity from all age groups as it threatens everyone.

The International Youth Day should therefore not be just ceremonial. It should translate to life changing pro-youths’ policies and strategies. It is high time the youths come together at regional, continental and internationally and make their voice heard. Regional and International bodies should deliberately create spaces for the youths for the intergenerational relationship to fully materialise. The youths should not just be incorporated as tokenism, but they should be listened to and heard. Happy International Youth Day to you all!!.